How the WidowMakers were reborn!

How the WidowMakers were reborn!

At a meeting of the WidowMaker Command Keshik shortly after the slaughter of the merchant caste (August 2834):

“…And you are certain the merchant caste was provoked by agents of Clan Wolf” said Khan Cal Jorgensson?

“Yes, my Khan,” replied the officer.

“Would that we had known this before we were forced to respond.”

“Indeed. We can be certain that they will call for a Trial of Annihilation against us now,” replied SaKhan Kyle Vordermark. “I have taken the liberty of doing a force assessment and we are equal to the Wolves in skill, firepower, and resources to a warrior. They are cunning, but we are ferocious, holding nothing back”

“But they will not come at us alone. For what we have done they will have the weight of the Grand Council behind them. The impetus of justice shall drive them; albeit fueled by their hatred of us. We must prepare for what is to come. Increase the training regimens, I want all able bodied warriors prepared for what the Wolves will unleash upon us.”

Kyle Vordermark offered, “Is there any way we could sue for a different path? Any way to give reparations to our people and thereby satisfy the other clans? As I have said, we are the equal to the Wolves in every regard. We are the Elite of the Elite. Were it not for the enmity that burns between us we could be brothers with the Wolves.”

“ Apologies, my Khan, I meant no disrespect…”

“No.  No apology is needed. In fact, you have just decided our course of action.”

“If it comes to it we shall maneuver them to seek Absorption.  As you have said, we have the finest warriors. They can easily be maneuvered to desire the addition of our own strength to theirs. The Wolves are cunning. It is their strength. Our natural aggression and preternatural skill is ours. They have outmaneuvered us on the battlefield and in the council chamber for the last time. It is time for us to be cunning. They will never expect it of us.”

The Khan continued, “By the time I finish with them they will seek to add our strength to their own thereby making sure they can attain and hold on to the rank of ilClan until the time of the Return. But we shall lie in wait; waiting within the belly of the Wolf.”

“Time is short. We need to find someone who can work in the shadows, unseen, unheard, and untraceable. Someone who can lay the foundation from which the Widowmakers can burst forth, one day, in glorious rebirth; in defiance of those who would see us lost and forgotten.”

“The deepest shadows are cast by the brightest light,” came a comment from the corner of the room.

“What did you say?” asked the Khan as he turned and looked with eyebrows raised.

An aging Star Colonel stepped forward. He was unremarkable in any way. To glance at him one would underestimate his worth. Advanced age wore heavily on his face, yet his body was obviously that of a warrior, fit and trim, ready for action in an instant.  Under more focused scrutiny, one could see in his carriage and demeanor the impression of a man who could kill in the briefest of moments with the slightest of effort. The fact that he was so aged yet part of the command Keshik spoke volumes and the respect shown to him by all in the room, including the Khans, was obvious. Here stood a man of vast experience, knowledge, and wisdom. All of which made him deadly on and off the battlefield, but nothing so much as the combination of his humility and confidence. While other Clan warriors paraded about boasting of their skill and deeds, this man walked quietly among them, fearlessly. His courage and confidence were borne of a belief in something beyond himself, something eternal. He would speak of it if asked and spoke with passion. But mostly, he let his actions speak louder than any words he ever uttered. Knowing this about the man, Khan Cal Jorgensson was intrigued.

“It was an axiom I heard my parents utter often’” said the warrior.

“Indeed!” said the Khan. “I designate you to be the one to make sure that the Widowmakers legacy shall outlast any scheme of the Wolves or the Grand Council. You shall have whatever you need. But make sure that no one knows what you are about. Remain in the shadows until such a time as we are ready to return to the light.”

“My Khan!” He responded as he inclined his head to show acceptance of the charge. “Then I must ask one thing of you.”

“In order to be successful in the task you have given me I need to you, and all those about you,” he let his gaze fall on all those in the room about him, “to burn brighter and hotter than any star in any sky has ever burned. Will you do this?” As he asked this, his focused gaze communicated to the Khan, and all those in the room, that he was asking much more than his simple words conveyed and that he asked them to grasp the significance of their meaning.

Khan Cal Jorgensson’s reply was a feral grin followed by a chorus in unison by all those in the room, “SELAH!”


Whether by intention or some other cause, the identity of the Star Colonel has been lost to time. The only known references to him simply designate him as “D”; whether this stands for his name or not is unknown. Most choose to believe it stand for “Designate” since it was he who was designated the task of keeping the Widowmakers alive once absorbed by Clan Wolf.

Little is known about the plans and strategy implemented. But what is known is shared below:

Upon being absorbed into Clan Wolf, those who remained true Widowmakers, whether freeborn or true, would identify themselves with a mark. The mark was an “S” for Shadows, which they would use to refer to themselves until the appointed time. And for 16 decades the Widowmakers lived and thrived in the shadows of Clan Wolf, totally unknown to their host clan. They awaited the day when they could be reborn.

As time is wont to change all things, in time, the Widowmakers not only grew and thrived, but changed in their dominant demeanor. While still warriors to be reckoned with, their close association in, and even intermingling with, Clan Wolf led to many changes. Combined with the necessity of subterfuge to keep their heritage alive, the Widowmakers learned to be more even tempered and thoughtful. Whereas their old nature was to be rash, harsh, and sometimes brutal – not unlike the Smoke Jaguars, their new nature had merged the best qualities of both Clans such that they were often warriors without peer; deeply thoughtful and contemplative, while passionate and vicious in battle. They fought, and still fight, without reservation for what they believe in and consider to be worthy.

The first stirrings of rebirth began in the year 3000, when Khan Nadia Winson of Clan Ghost Bear proposed a vote to begin the invasion of the Inner Sphere. After much debate and discussion the Dragoon Compromise offered by Khan Kerlin Ward of Clan Wolf presented the perfect opportunity. It called for swift action and response but the Shadows (Shadows of Clan Widowmaker) were ready.

The Dragoon Compromise called for the formation of a unit to infiltrate the Inner Sphere and provide information in advance of the invasion.  A unit was formed under the leadership of Jaime and Joshua Wolf, both freeborns. The unit was recruited of mostly freeborn volunteers from within Clan Wolf and a few Trueborn Warriors. What was not known was that Jaime and Joshua Wolf and the vast majority of the recruits for the Dragoons were in actuality Shadows – remnants of Clan Widowmaker. This included ALL of the Trueborn Warriors who volunteered.  They volunteered because they were alerted to the opportunity for the emergence of the Shadows into the light; to once again stand tall and become Clan Widowmaker. Of most significant note is that Natasha Kerensky was a Shadow!

The Clan eugenics program follows the matriarchal line for determining who is worthy of pursuing a Bloodname. In order to keep the genetic legacy alive Shadows follow the genetic legacy of both parents. It is speculated among Shadows that Natasha Kerensky’s Patrilineal heritage can be traced back to “D”. The significance of this will be revealed in a moment.

During the exploits of Wolf’s Dragoons, Kerensky further distinguished herself. She was given command of her own company which she named the Black Widows. It was known that she had a genetic heritage linking her with Clan Widowmaker. It is believed, but unconfirmed, that while doing some research of her heritage she discovered her connection to “D”. Further digging by her personal historian Gustavus Michaels revealed the depth of significance he had played in keeping the Widowmakers alive and fueled her naturally rebellious spirit.

On July 21, 3051 Natasha Kerensky was elevated to the position of Khan of Clan Wolf because of the vacancy left by Ulric Kerensky’s ascension to ilKhan and upon proving her battle prowess by successful completion of her Trial of Battle in which she defeated an unprecedented 4 opponents. Shortly after securing her position and authority she issued a decree to all Shadows. It was veiled in a speech to Clan Wolf as a whole, but the message was received loud and clear when she spoke the words, ”It will soon be time for the Shadows to step into the light”. Preparations for the re-emergence of Clan Widowmaker began.

Jaime Wolf began the process of converting the resources on Outreach, the Dragoon stronghold, which included housing, R&D facilities, mech production facilities, and more, into a home for the re-emerged Clan. With new leadership and direction the Clan would establish itself as one of the premier Mercenary Units in the Inner Sphere and would declare themselves to be the guardians of, not just the Inner Sphere, but all space from the predation of those who seek to oppress the freedoms of others!

This is the official Lore and history of our Clan.
I swear this on my honor. I affix my seal.
This is my Rede. 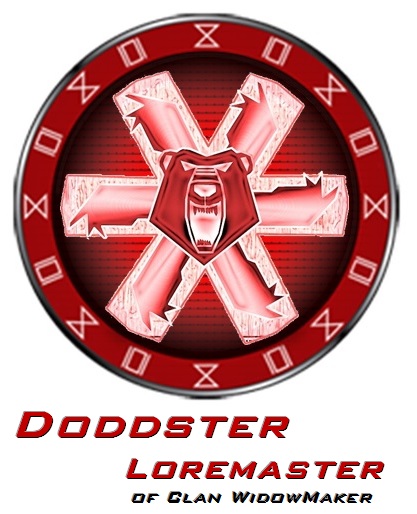