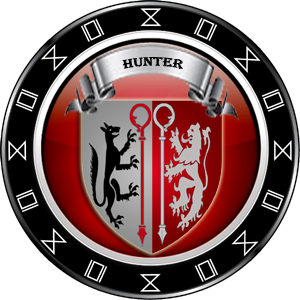 While searching for the lost bloodcrests, the legend surrounding the infamous Widowmaker founders was also discovered. One of which details how the Hunter bloodname was added to the list of 40 warriors. Read up on this tale to learn about our murky past and one of its founding members.

The Hunter family had a long history of being loyal and worthwhile soldiers to the SLDF, so it is of no surprise that when Kerensky put out his call for an Exodus that the Hunters followed. Unfortunately, Captain John W. Hunter died trying to keep the peace in a riot on Eden, leaving his young son, Alex, to carry on the Hunter name. When Nicholas Kerensky formed the Clans, Alex, being of a young age, was too inexperienced to join the ranks of the 800 warriors and was relegated to the Technician Caste of Clan Widowmaker. Surviving the Clan's turbulent early years, he ended up on the exodus from Clan Space after the Trial of Annihilation. Without a significant number of surviving warriors, the clan had to reform itself. The main concern was not who only would lead the survivors, but how to cope with their hardships. The man that would take charge in the debates would be none other than Alex (Hunter), who wanted to continue the clan tradition. After days of debate, it was decided that Widowmaker would continue down the Clan path and that Alex (Hunter) would lead it. His surname was added to Widowmaker bloodnames in honor of his Khanship, and his legacy has continued to be a valuable asset to the Clan.

While not as fearful as the Karrige bloodhouse on the battlefield, these warriors make up for it with their wisdom and ability to remain calm and collected. Those of the Hunter lineage often end up in positions of command for this exact reason. The Hunter bloodname has gained an extensive amount of respect since our rebirth, exceeding that of even the Karrige bloodname.